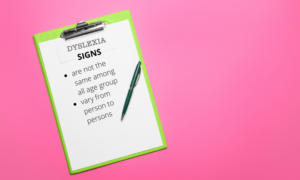 The signs of dyslexia are not the same among all age groups; neither are they experienced in the same way by everyone. Instead, how the symptoms and signs of dyslexia manifest themselves may vary from person to person. Given below are some of the signs  that may signify the presence of dyslexia in a child. To formally diagnose a child with dyslexia, parents need to get an assessment done by a professional.

Signs of dyslexia in pre-Schoolers

The signs of dyslexia may be difficult to recognise before the child starts school. However, some early signs may indicate that a child may have difficulty:

• Difficulty in telling left from right

• A history of slow/delayed speech development often mispronouncing familiar and simple words like “cat”, “the”, etc.

• Finding it hard to carry out more than two instructions at one time, but carrying out tasks individually

• Has difficulty in understanding what they have read

Signs of dyslexia in school years

• While reading often omits or repeats words, the level of comprehension is low

• Has difficulty taking notes in class due to the slow writing speed; hence finds difficulty finishing tasks on time.

• Oral ability is better than written work as handwriting is poor, therefore may score better in the verbal test than written

• Is disorganised, forgetful and clumsy

• Has difficulty making friends as reading body language is difficult

Signs of dyslexia in teens and later years

Signs of dyslexia in teens and later years are somewhat difficult to address but parents need to look out for the signs even when children are in their teens.

• Inaccurate reading with limited comprehension, therefore, may avoid reading aloud in the class

• Finding it hard to concentrate if there are distractions

• Feeling sensations of mental overload and ‘switching off’

• Has difficulty in telling left from right

• Has difficulty in the organisation of – thoughts, time, priorities, etc

• Difficulty in remembering rules of games and reading clocks

• Trouble in learning a foreign language

• Struggling to meet deadlines and finish tests on time, struggles to remember names, numbers and dates